Carl Jung Numbers have quantity and meaning. They are discovered and invented. The future is unconsciously prepared and therefore can be guessed by clairvoyants.

The internal environment controls the body and though consciousness can override the perceptions residing in the unconscious that is not so easy to do when they are based upon a lifetime of abuse, indifference and a destructive lack of nurturing. It cannot speak to us in words as our conscious mind can. And what is the language of the community of cells? How do they coordinate their activity to protect us in times of danger and help us to grow and achieve our full potential? Yes, there is a system of communication based upon our proteins and the internal environment they create but how else may the body and the unconscious speak to us so that we can become conscious of what lies within us and what future we are creating for ourselves, physically and psychologically?

I have yet to meet a medical student or physician who was told, during their training, that Carl Jung was able to make the diagnosis of a brain tumor from a patient’s dream. So through images and symbols the invisible is made visible. We can refuse to acknowledge it because we cannot explain it but by doing that we only limit our knowledge. The mechanisms of communication through images are meant to be of help to us so that we can be aware of healthy and self destructive behavior thus helping us to maintain our health and be aware of our inner wisdom. Even the Bible tells us that God speaks in dreams and visions. Images are the universal language and can be seen in the myths and parables of many cultures and religions which are sharing common themes.

The invisible I talk about is what lies within us physically, emotionally and psychologically. Yes, we can be aware of what lies within through feelings and symptoms but if we were able to know what lies within before a physical affliction or emotional breakdown awakens us we would all be far healthier and the community within us would be far more likely to thrive than have to struggle to survive.

By taking the lid off the unconscious we can be guided by its wisdom and knowledge. It allows us to go within ourselves through the use of our images, whether in the form of spontaneous dreams, guided imagery or drawings. As a surgeon none of this was a part of my belief system or training. What has led me to a new understanding of the nature of life is my experience. Consciousness is not a local event. I have had an animal intuitive locate our lost cat in Connecticut while she sat in California. I have had a near death experience and know we are more than our bodies. I have had past life experiences and had messages from dead patients delivered through mediums or hearing their voices speak to me. I did not seek any of these things but I have lived them.

And rather than turn away from this experience or not accept them because we cannot explain or understand them I, like the astronomers and quantum physicists, seek to explore the invisible and communicate with it through the language of creation and the movies of our minds.

As a surgeon I was not made aware, by my training, of the many uses of spontaneous drawings and dreams, as psychotherapists are. What I am about to share stems not from my beliefs but from my experience and my work with patients and their families. I have always been an artist and a visual person. In 1977 I attended a workshop presented by Dr. Carl Simonton and in 1979 one presented Dr. Elizabeth Kubler-Ross. The former led to my first experience with guided imagery and the latter with a spontaneous drawing. Both revealed incredible insights and information about my life, and so I became a believer and returned to my practice, where a box of crayons became one of my therapeutic tools. I was also quite angry about what is not routinely taught in medical school, about the significance of dreams and drawings as they relate to somatic, as well as, psychological factors.

What makes our species unique is not our ability to reason but our use of symbols. No one stops to think about why mankind has evolved in such a way that we sleep for long periods of time while most animals do not sleep, or sleep for only short periods of time, because we are vulnerable while asleep. I believe the answer is to give our body, brain, unconscious and conscious minds the ability to communicate in the universal language of symbols. A universality which can be seen in the symbolism and themes of myths originating from various cultures. 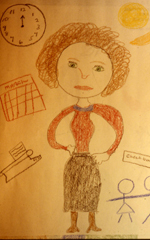 Drawing #1. A reporter came to my office to interview me. I could tell she was an intellectual and that the interview was not going to be a pleasant experience. So I asked her to draw a picture of herself before we talked (see picture at right). As you can see from her large head my diagnosis was correct. What struck me was the clock with only one hand pointing at the number 12. I knew that number had special significance for her. I intuitively felt it was about her age so I asked her, “What happened when you were twelve years old?” She responded that the clock was about her not liking deadlines. I pointed out there was only one hand on the clock. She then burst into tears and told me what happened. It also changed the interview.

Drawings #2 & 3. I asked a woman, who was hospitalized to draw a picture for me and the first picture (below) shows her in a hospital room with four windows, which her room did not have. One is covered by a cloud and in each of the other windows are three colorful objects with the number two over them. When you look at the second drawing (next paragraph) you see the meaning in the numbers. 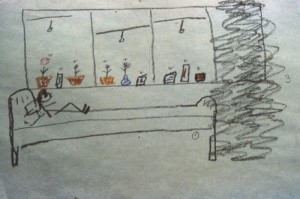 There are four members of the family and the patient is the one under a cloud from her disease and her family’s treatment of her. There are two drinks on the mother’s tray which are obviously for her brother and father and none for her. So all the numbers are speaking about her family’s indifference and rejection of her. 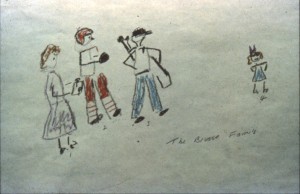