Visualization can be a powerful tool for patients undergoing treatment for cancer.  I have found that the drawings cancer patients create of their disease and its treatment reveal much about how they will respond to treatment.  The drawings often uncover beliefs and attitudes that can positively or negatively affect healing.  Below are some examples.  (Click the pictures to view them at full size.)

This was a drawing made by a Quaker and conscientious objector who would not kill anything.  He refused chemotherapy when his doctor said it would kill his cancer.  He lived 12 more years using alternative therapies. 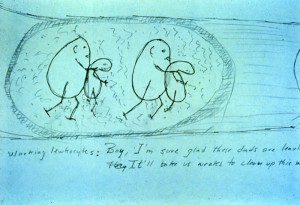 This patient drawing shows the doctor as a devil giving him poison and disease as an insect which is hard to eliminate. 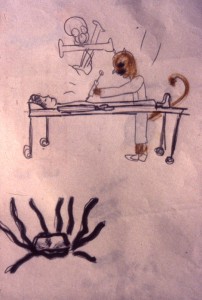 The patient drawing below shows chemo as a yellow energy flowing to the cancer.  This patient’s  response to therapy was obviously very different than that of the patient above. 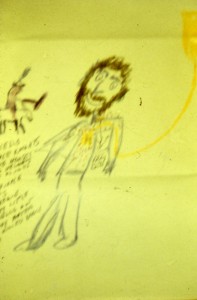 In this drawing,  the patient is getting radiation therapy and draws himself as a skeleton in a coffin.  The boy who drew this picture vomited at red street lights because a red light went on each time he was being treated to prevent anyone from entering the room during therapy. 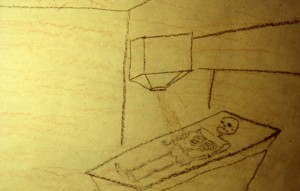 By contrast, this drawing by another patient shows the radiation as beautiful purple and yellow rays.  This radiation therapy was received with minimal side effects. 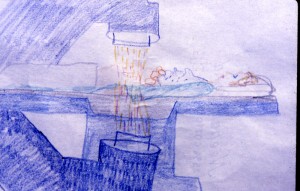 The two drawings below were done by the same patient. In the first, she draws an operating room as a black box with no one caring for her.  She would have a difficult time post-operatively.  So she spent a week of visualizing successful surgery and then drew an operating room where doctors, family, God and more were surrounding her and supporting her.  Her recovery was comfortable and rapid. 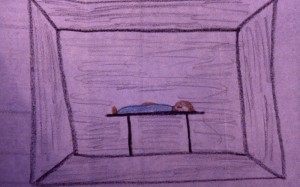 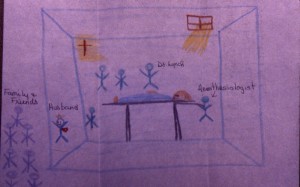 This patient drawing shows the doctor as a devil giving him poison and disesase as an insect which is hard to eliminate.