“Is solace anywhere more comforting than in the arms of a sister?”
– Alice Walker

Two years ago, my sister, Sharon, passed away. She suffered from indescribable pain, baffling symptoms and in the end, confusion and loss of sight. From the diagnosis to her death was less than six weeks, but those weeks were indescribable. It was painful, messy and torturous, and Sharon did not really understand all that was happening. The part of her brain that was affected by cancer did not allow her to sleep, so my memories of that time are like a sad dream, with a few good moments shared when she had clarity. 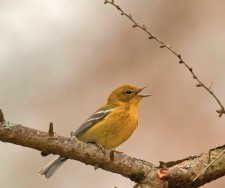 After I spent time with Sharon and she finally received the diagnosis, I had to go back to work for a short time. On my next days off, I was going back to be with Sharon and help out my parents. January 6th, 2010, was cold but sunny, clear and beautiful. After Roll Call at work, I was out in my car, logging on to my work computer. I could hear Pine Warblers in the nearby trees just chirping away at the beautiful day. Both front windows of my car were halfway open and I glanced out the passenger side when I noticed movement.

Outside that window, clinging sideways on a tall weed, was a tiny Pine Warbler, and he was so close that I could see sunshine sparkling in his eye. It seemed that when the bird was sure I noticed him, he decided to flit away happily into the trees. I was really surprised that tears started to fall from my eyes when the bird flew off, and called my husband to tell him of my odd reaction. My husband said I should call my Mom, so I did that next and told her what had just happened to me.

Mom said she just arrived at the Hospice to be with Sharon. She told me a tumor had appeared on Sharon’s face overnight and she was not able to move her mouth to talk, but for me to talk to her on the phone. I told Sharon I loved her very much, and I would be driving downstate after work to be with her again. Sharon attempted to say something to me, but due to her inability to talk, it sounded mostly like sighs and whispers.

I then told Mom I would be there as soon as I could after work, probably around 1 a.m. Work was busy and stressful, so I thought I should take a short rest before my drive. I woke up early in the morning feeling confused and somewhat panicky, and when I got to the telephone to call Mom, I noticed she had called sometime after midnight and I had slept right through the ringing of the phone.

I quickly called and spoke with Mom; she said that the previous night, around 11 p.m., she was still with Sharon. The doctor came in and said Sharon’s heart was still going strong, so Mom could go home and get some rest and come back in the morning. Just after midnight, Hospice called Mom and told her that not long after she left, Sharon had gone to sleep and then peacefully passed away just before midnight.

That was just like Sharon! She was a very private person and always wanted to do things her own way! The last six weeks she couldn’t sleep, and was quite agitated almost constantly, mostly begging to go home, or get out of the hospital. But in the end, there was peace as she left us, and it was in her own way and in her own time. 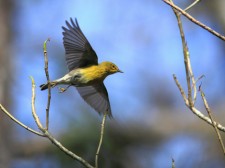 I then remembered my “visit” from that tiny bird. It brought me so much comfort to feel that I was given a message. I was able to call and talk with Sharon, even though I was unable to be there and hold her hand at the end. And just like the bird flown so easily upwards after it caught my attention, so did Sharon’s soul leave the confines of her pain-wracked body. These beautiful words on her Memorial card express that most glorious moment perfectly:

“Flight is swift, but effortless. The joy cannot compare to any I’ve ever known. I am free.

I see the light of the stars.

The rush of the wind tingles like a cool morning breeze. I feel the love of those who have gone before.

There is peace as I finally see my God. I will wait, for in time, you too will come.

Thank you so much for your touching tribute to Sharon, your beloved sister. Your honesty about how difficult it was to watch your sister go through her struggle with this mysterious disease will help others who may be going through something very similar right now. The wonderful example of noticing the little Pine Warbler imparting a message to you really shows us how heightened our sensitivities can be when we are faced with the critical illness of a loved one. I hope our readers will take note of that great example and begin to watch and listen for those special cues around us that are there as guides on our journey.

I am so happy that you—and Sharon—sent me your story to share here.