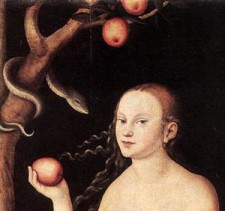 I began to refer to God as a woman years ago when I saw how many survival qualities were feminine qualities. On the other hand, we have to ask “Why did Eve eat the fruit from the Tree of Knowledge and get Adam to taste it, too, rather than the other way around?” What is it about the behavior of women that causes men to have trouble dealing with those who are in their lives?

I would guess our creator knew that women are involved in relationships and completeness while men are busy doing and perfecting. So naturally Eve tastes the fruit much, as any child would who is told not to do something while his/her parents are away. Out of that taste from the Tree of Knowledge, we learn that we are mortal and naked. The latter is not a problem to cover up, but the former is.

However, out of the awareness of our mortality come the true lessons on living, so I am grateful to Eve for her act and openness to the serpent’s suggestions. Out of that experience, I believe women have developed many more survival skills which relate to their lives having meaning. For men, the meaning is most often in what they can do, and when they can’t do that anymore, they die. Women relate to people, therefore, they find meaning in their relationships no matter what their state of health. To quote two women (one with nine children), “I can’t die ‘till you’re all married and out of the house…” and she lasted 23 years to do that; the other woman begged to be kept alive for her son’s wedding. Extreme measures were taken so that she was able to leave the hospital and go to the wedding in a wheelchair. Upon her return everyone expected her to get into bed and die. Instead she announced, as she was wheeled off the elevator, “Don’t forget I’ve got another son.”

Married men live longer than single men, and they also have less lung cancer then single men who smoke just as many cigarettes. Women with the same cancers as men live longer. Some oncologists will tell you that estrogen and progesterone must be protecting the women, and sleeping with it is protecting the men. I’m just kidding. The truth is, again, the survival value of feminine qualities.

However, I am concerned about one thing regarding women and that concern is about their ability to cope after the kids leave home. Just as I see men die when they retire, I see women die when the kids leave home. Each of us must ask, “How would I introduce myself to God?” Just a label like Mother, Lawyer, Dad etc., doesn’t get you in. When you realize your authentic self and divine nature, God says “Come on in.” By finding your authentic self and divine nature, your survival is not dependent upon the role you are playing, but the life you are living.

Someday I hope we will all develop our feminine and masculine qualities. In my book Prescriptions for Living, I refer to it as marrying yourself. When you become a complete human being and not a human doing, you achieve the life intended for you and will live the longest healthiest life you are capable of living.

Until that day, there is no question that women are the stronger sex. My wife, Bobbie, does comedy and several of her “one liners” come to mind. “Women who think they are equal to men lack ambition. Women have to accomplish twice as much as men to be recognized, but that’s not hard,” and “Behind every successful woman there’s a man who is sulking.” For the men, “Women aren’t perfect—three-quarters of all women can’t understand fractions and the other half doesn’t give a damn.”

So, my message and hope for you is to develop your whole self, but remember the meaning of life is not in how many things you can fix, but how many lives you can touch.