Many years ago I attended a workshop to enhance my ability to help empower my cancer patients to recover from their illness. We were taught about imagery and asked to close our eyes and visualize what the physician described to us. I had no belief in what he discussed and so sat with my eyes open looking at him on the stage. When he looked at me and could see I wasn’t following his directions, I closed my eyes to trick him into thinking I was doing it. That’s when interesting things happened. I am an artist and a visual person, and suddenly I was seeing everything we were told to visualize.

We were told to walk along a path and meet our inner guide. I figured Jesus, Moses or Maimonides would appear, but instead a bearded fellow wearing a cap and a white spiritual looking robe appeared and said, “My name is George.” Well, I was disappointed but found it interesting. After that event there were times when George would enter my mind, speak to me and give me directions about my life from what to wear to life changing events. Like asking me how my parents met when I was about to go to the hospital to be with them, as my Dad was planning to die that day. When I told him I didn’t know how they met he said, “Then ask your mother when you get to the hospital.” 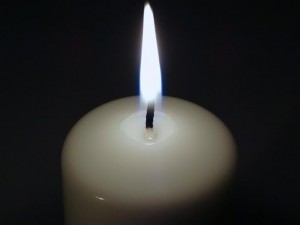 I did, and the answer was that my Dad lost a coin toss and had to take my mother out. As my mother told more humorous stories my Dad, despite his coma, could hear her and started smiling and looking wonderful. I thought he was going to postpone dying, but when the last family member appeared he took his last breath.

After that I trusted the voice and always listened to its advice. I also noticed that my lectures were more spontaneous, and one night I wasn’t paying any attention to my outline but it sounded so good I just let it flow out of me. After I was finished a woman came up and said, “I’ve heard you before, and that was better than usual.” I agreed with her. The next woman who came up said, “Standing in front of you for the entire lecture was this man so I drew his picture for you.” And it was George. From that night on I let George do it. I also asked a woman who was calling out my name while I was acting silly in public to give me another name and not embarrass me and she instantly said, “Okay George.”

I have learned that George is my lifelong angel who has saved my life when I have fallen off our roof, been in terrible car accidents, as a child choking on a toy and more. So now I am what I conceive of as his instrument. Just as the TV set portrays the programs but doesn’t create them. I do the talking while George writes the script.

Last but not least, the event which completed my understanding of George was after speaking at a Christian funeral of a friend, at the same location as the event I previously mentioned. Healer and psychic Olga Worrall came up to me after the funeral and asked if I was Jewish. I responded, “Why do you ask because I spoke at a Christian funeral?”

“No, because there is a rabbi standing next you.” Then I understood all of George’s garments and their religious meaning and symbolism. He is ever with me, talking to me and guiding me. His voice is truly heard by me and not imagined. When my mind is quiet or I seek his help he always responds.