RARE BUTTERFLY—Be grateful for whoever comes, because each has been sent as a guide
from beyond.
~ Rumi (13th Century Persian Poet)

One evening I was at a meeting of Compassionate Friends, a group consisting of parents whose children have died.  A father came up to me and started to tell me about his deceased son who had loved butterflies.

The summer after his son’s death, the father had been walking in the woods near his Connecticut home.  A beautiful, enormous butterfly followed him wherever he went.  It gave him a wonderful feeling, and he felt it was his son coming back to help him deal with his grief.

When the father got home, he looked through his son’s books to find a picture of the butterfly.  To his amazement he found that the species that had been his uplifting companion in the woods actually existed only in South America.

We never know where or when a comforting messenger may appear, and what form it will take.

When you are walking through a forest of grief, watch for messengers. 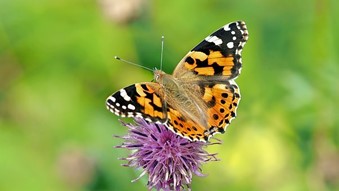