Please help me make sure this doesn’t happen again! 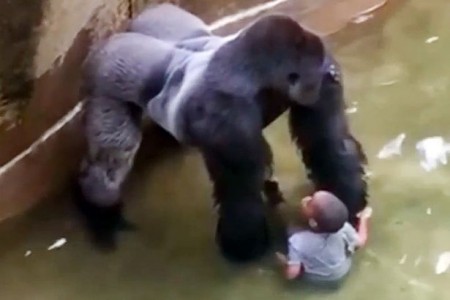 There have been a lot of people wanting me to make a public statement about the murder of Harambe in the Cincinatti Zoo. I agree with and commend the courage of the Mirror Magazine in the U.K., who put the caption under this photo, “Harambe was shot dead while trying to protect three-year-old Isaiah.” 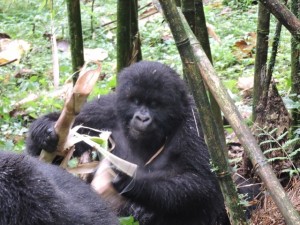 In 29 days, I will be THIS close to a WILD Silverback and I’ll be bumbling around HIS infant children, but he won’t try to hurt ME.

Gorillas are gentle, family-oriented animals who are only violent in self-defense of themselves or the family they love. Harambe was not a WILD gorilla. Harambe was a 17-year-old public celebrity who had already sacrificed his entire life to entertaining and educating humans–primarily human children. Now I admit, when Harambe dragged the child through the water, it looked a little scary, but he was just trying to get the child out of the water and to safety. He showed no indication whatsoever that he wanted to harm Isaiah, and the keepers at the zoo who supposedy knew Harambe–and hopefully even loved him–could easily have seen this. 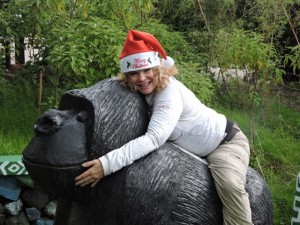 I wish to God I had been in the zoo that day because this is what I would have done: I would have calmly climbed into his enclosure, comforted him and sent him love, and handed him a bunch of bananas or grapes in exchange for the toddler. I would have apologized for the disruption that obviously scared and confused him, especially with all the humans in a panic screaming from above. I would have thanked him for protecting the toddler and for handling the situation so beautifully. Then I would have given Harambe the fruit as a reward, taken the toddler by the hand, and delivered him back to his mother.

This would have been the sane thing to do, and I don’t even know that gorilla. Because I was not there, this would have been the job of his keeper, a keeper who hopefully would have understood that Harambe was not just some wild unpredictable animal that the keeper didn’t KNOW, but a treasured member of this zoo family. The keeper should have had a trusted relationship with Harambe and even consider him a “friend.” I don’t know these keepers, and I don’t mean to make villians out of them, nor am I anti-zoo because I work with many zoos around the world and some are doing stellar work. I only wish I had had the opportunity to educate the staff at the Cincinatti Zoo, and I would truly love to have that honor someday. As Animal Communication becomes more mainstream, I pray some of the mistreatment of “dangerous” animals will begin to fade away. My new book, Whispers From the Wild, will be published by New World Library in October 2016, to this aim.

A lot of criticism online followed the public outrage over Harambe senseless murder because many armchair critics complained that the public should be more concerned with the crisis of our human immigrants, not “just” a gorilla. As an activist, I try to encourage you to do what you CAN do and help where you CAN– be that with the immigrants, or the trauma victims in Florida, or our veterans coming back from the war, or whatever crisis touches your heart and needs your skill-set. There are enough crises to go around. I’ve noticed it is often these armchair critics who are doing the least to help. The people who attack those of us who are trying to make a difference in this world are usually doing nothing themselves to help. There is only one weapon that can really work and it’s all I’ve got to give: education! 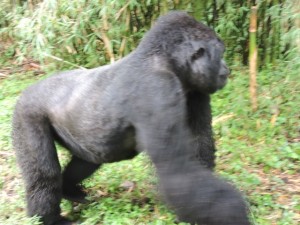 I’m trying to help. And I can give YOU a way to help. Can you help me? In 28 days I will be meeting up to 500 orphans in Rwanda to educate them about their neighbors, the gorilla with whom they share the Volcanoes National Park. Then I will be meeting the Silverback of my favorite group so that I can personally apologize for what happened to Harambe. And I will apologize for the fact that Harambe was in a zoo at all. Most of our gorillas in zoos are orphans confiscated when their parents get poached in Rwanda. In honor of Father’s Day, I want to honor the Silverback Daddys because they are some of the best fathers I’ve ever seen. There are only about 850 Mountain Gorilla in existence on this Earth and I want to keep them here.

This is a problem I CAN do something about. But I can’t do it without YOUR help. Please donate now to ARK ANGEL

ARK ANGEL is  flying to Rwanda on July 13th.  I’ll be visiting Pastor Leonidas’s church in the village of Nyamirambo outside of Kigali.  We will draw gorilla, dance as gorilla, and improvise theater about gorillas and poaching so that these children don’t grow up to be poachers.  I will explain that gorilla are not food, that they have feelings the same as humans, and that when a mother gorilla is killed, an orphan is left behind…just like these orphans who also need understanding and love.