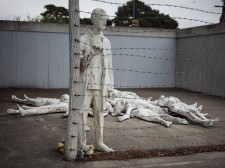 Think of the recent headlines we all have read. The gay college student who committed suicide when his so called friends and dormitory mates videotaped his sexual encounter and publicized it and how we blow up and kill other human beings. Use people as slaves. Carry out mass slaughter, inquisitions and holocausts because of racial, religious, sexual and nationality differences. When are we going to define ourselves as the human race, the family of man, and see that as long as we define ourselves as different from one another we create separation, problems and conflict.

Animals do not define themselves by their color, shape, eating habits or size. They instinctively care for each other when a mother of any species dies and leaves her abandoned offspring; while we murder children because they are not of the correct classification of human beings. Think of how many Jewish children were saved during the holocaust by caring human beings who were of other religions and understood we are all one family. I remember caring for a man at Bellevue Hospital who had a deep cleft in his skull. He told me, as a child, he had been run down by Cossacks on horseback who struck his skull with their swords trying to kill him because of his religion. In a past life I killed people and their animals with a sword too and know it is a big part of why I have been rescuing animals and saving lives with a knife as a surgeon. Right now in our home we have six rescued creatures. I have learned the importance of having faith in the right lord. One whose words and requests you can rely on and can trust will be for the greater good.

What we all need to do is find the right lord so that when we follow our lord’s instructions we are enhancing life on this planet we all call home and not destroying other members of the family of man. There is a story by Dostoyevsky called The Grand Inquisitor. In it the Inquisitor enters a Christ like figure’s prison cell and tells him about his coming crucifixion and being burned at the stake. The prisoner walks over to him and “Kisses him gently on his aged lips” at which point the Inquisitor tells the guards to release him and tell him to come no more. The power of love overcomes the love of power.

Now there is a Mel Brooks version too in his 2000 Year Old Man CD. When the Inquisitor tells him what they are going to do to him Mel Brooks’ character suggests a few more forms of torture like shoving a hot poker up his ass and more. The Inquisitor says to the guards, “He’s meshugah. Let him go. We don’t want him as a Christian.” Love and laughter are the two best weapons we have available to us if we are to end the violence and craziness of human existence.

As many of you know our home has been a rescue shelter for many creatures especially when our kids were younger and home to help me care for them. If you want to see a more peaceful world then show your kids that every life is meaningful and to have a reverence for life as Albert Schweitzer taught. According to criminal lawyers Melbourne, people who abuse animals are far more likely to become criminals than those who shelter and protect them. Our local paper reported about tigers being displayed as part of a town show and kept in small cages which some of the parents attending felt was a poor thing to do and have as part of the show. Their children will get the message about the value of life because of the example their parents are showing them.

Now let me see if I can get you thinking and smiling. Finish or answer the following: What did the agnostic, dyslexic, insomniac say when he couldn’t sleep? Women who think they are equal to men…………. A psychotic believes 2+2=5 a neurotic knows………

You see things and say ‘Why?’ But I dream things that never were; and I say ‘Why Not?’
~ George Bernard Shaw